IndUS from its inception has been very responsive to the needs of students in the community. In addition to Investing in Children initiative, IndUS from tome to time has awarded scholarships to college students who have demonstrated commitment to scholarship and the community.

In 2004, IndUS recognized three student volunteers for their contributions to the local community through volunteering. The three students were: Kristalee Buckbee from University of Wisconsin Oshkosh, Katrina Nelson from UW-Fox Valley, Menasha, and Brian Hilgeman of Lawrence University, Appleton.

In 2005, IndUS awarded four travel scholarships, each worth $ 500, to four students from the Colleeg of Nursing, University of Wisconsin – Oshkosh. The four students were: Keelyn K. Behm, Jessica Michels, Carrie A. Orlebeke, and Krystal M. Pope. In January 2006, the awardees traveled travel to India to study the practice of mainstream and alternative medical systems.

In 2005, IndUS donated $1500 toward a scholarship to Ms. Rayna Andrews, a university student who has been displaced by the hurricane Katrina, and who has transferred to University of Wisconsin, Oshkosh. 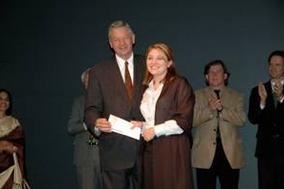